We have had an interesting week filled with varied activities and a few hilarious moments.  First up we went on the Airboat Adventure Tour looking for alligators through the grasslands(needle rush grasses) skimming over inches of water.  No alligators to be seen but the airboat experience was great.  Lots of 360 deg turns, bumps, drenching and did spot birds in their natural habitat including eagle nests.  Did get to handle a small alligator at the compound, very different to our crocodiles, flat nosed of course, but also very rubbery.

Never smile at an Alegator? 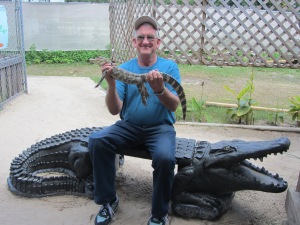 Another day we stopped in to have lunch at a place called Fudpuckers, apparently known around the World (we hadn’t heard of it but I guess being from Down Under maybe understandable.)  They have the most amazing collection of Tshirts (many quite rude a play on the name of the restaurant), souveneirs and an alligator display.  We looked around then went in for lunch.  I decided on the crab claws and Duncan a chicken salad.  I had a Pina Colada and D a glass of diet coke, bottomless.  Our jaws dropped when the crab claws appeared.  Smallest claws we’ve ever seen fried in breadcrumbs, very tasty though. Meals are really different, hard to tell by the menu just what you are ordering.  They have lots of shrimp dishes, like our prawns but much smaller, also lots of spare ribs, popcorn and peanut butter in all flavours are very popular.  After our meal we walked down to watch the alligators and had our photo taken with one.  Incidentally the name of the restaurant intrigued me so I asked.  A Fudpucker is from the triggerfishes species of brightly colored fish  often marked by lines and spots.  They inhabit tropical and subtropical oceans. 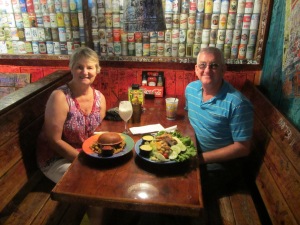 The weather has been much better and the red flags have been changed to yellow.  We had a couple of days where the water was crystal clear and shades of green and blue.  However most of the time it is choppy because of the stormy weather.  I was having a great swim when I looked up and saw a fin just in front of me.  My legs couldn’t move quickly enough.  As I stumbled out another couple of guys came over to me and said did you see the shark, it was about 5 feet.  Yeah had to be while I was in the water and out a fair distance.  I have been told not to swim past the second sand bar, not early morning or early evening. No lifeguards on beach. 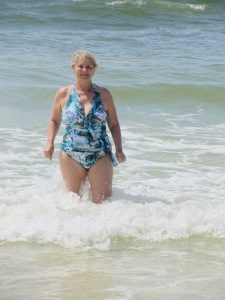 In my element – at the seaside

Another day in Paradise

A couple of funny stories – we went to Walmart to get groceries.  I asked where the toilets were; was told “we don’t sell them here” Silly me, restrooms of course!!!  Went to the outlet stores.  Again looking for a restroom – went into a store from the carpark, asked could I get into the centre of the mall through their shop and where were the restrooms?  She looked at me as if I was from the moon (or Australia) and said “m’aam I havn’t a clue what you are talking about.  Store entrances are only from the car park and, of course, the restrooms were about a mile away.  I found a great little church just minutes away from here.  Went on Sunday and then to a Ladies Group last night.  They all wanted to know about our lifestyle.  After I had explained some of what we do I was asked “does it pay well – do you have to go to training school?”  I had a great time with them and they seem a very friendly bunch of people.

Until next time,Love from  the leisure seekers.